Why I Can’t Get it Together

I’m still out of my pre-pandemic routine. Some days, the struggle feels way too big. And that soothing bowl of ice cream is SHOUTING my name. For yo

There are days, many of them lately, when I’m happy to prepare a meal, yet I am not in the mood to peel and chop a batch of vegetables to sauté, ro

Creating Art in Your Kitchen

Years ago, I did not believe that I had a single creative bone in my body. This was due to the fact that I got poor marks on my drawings in art class.

What is this Saturday, July 11, you ask? Why, it’s National Rainier Cherry Day! In 1952, Harry Fogle of Washington State University developed the Ra

It’s Summer, so Bring on the Ribs

In our family, summer means grilling. One of our favorites: baby back ribs cooked to perfection. There’s a rib joint in Porter by the name of Wagner

How does summer smell to you? What aromas make you happy? Maybe you haven’t thought about it much, unless you have seasonal allergies or a cold. Tod

A Time to Celebrate

Big weekend ahead. I wish all you fathers and like-fathers a very special Father’s Day this Sunday. May you enjoy a day filled with love, happiness,

Although a classic Nicoise salad is made with tuna, it’s nice with perfectly cooked salmon. Nicoise salad has all the light and vibrant flavors of a

The amazing season known as summer is nearly upon us. When I think of it, my mind sees beaches, hammocks, pitchers of iced tea, grills in action, all

admink
Food, Fun, In the Garden

I am often asked about honey—if it’s healthier than sugar. Honey does contain sugar. Per tablespoon, honey has 64 calories and 17g of sugar. That

Nothing to Sneeze At: New theories explored to stem the growth of food allergies, intolerance in children

(The following article first appeared in the March 2018 issue of Get Healthy, a publication of The Northwest Indiana Times. Online version)

Every morning while I got ready for school, mom would pack my lunch. Sometimes my main course was a salami, yellow mustard and sweet pepper sandwich on white Wonder bread. Other days, it was peanut butter, jelly and potato chips—only I added the chips in at lunchtime so they didn’t get soggy and because my sandwich style grossed out my mom. There was no way she would smash chips on a sandwich for her daughter then send her to school.

Interestingly enough, there was never a problem with the peanut butter causing a life-threatening situation for any other students. Most of my friends brought sandwiches made on Wonder bread too. We all managed to grow up unscathed. And this was in the 1960’s! 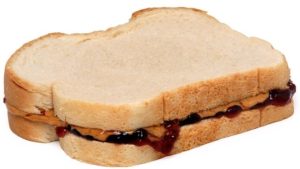 So why is it that, according to the Centers for Disease Control and Prevention, the number of children with food allergies increased 50% between 1997 and 2011?

The main theory will probably surprise you, and here’s a clue: Think back to “War of the Worlds.” (I’ll share the answer at the end if you are stuck.) The most accepted theory is known as the “Hygiene Hypothesis.” Basically, we need to let kids play in the dirt. Infants need a certain level of microbe (bacteria, virus, mold, germ, etc.) exposure in order to regulate and strengthen their developing immune systems. Our obsession to kill every last germ with antibacterial products has come with higher rates of allergy, autoimmune disease, and asthma. We’ve lost the balance. Children who were raised on farms, have numerous siblings, had pets or spent early years in daycare, have lower rates of asthma and allergy.

Another theory is that parents have been told to wait until after a baby’s first birthday to introduce foods that could cause a reaction. Because of this, when the child tries a new food later in life, the immune system is primed and ready to get rid of anything that seems out of line. Eat a peanut, and boom! What experts have now determined is that these foods should be introduced before the first birthday, since that’s when the immune system learns the difference between safe and dangerous.

What is the difference between a food allergy and food intolerance? A food allergy occurs when the body’s immune system recognizes a certain food as harmful and reacts by causing symptoms. Eating that food results in reproducible symptoms (an allergic reaction) that occur immediately (within a few hours) and with every exposure. Foods that cause allergic reactions are allergens. Typical symptoms include: hives, swelling, itching, difficulty breathing and/or swallowing, vomiting, low blood pressure (which can cause the person to pass out), anaphylaxis, and death.

The most common foods that account for over 90% of allergic reactions are: cow’s milk, eggs, soy, wheat, peanuts, tree nuts, fish, and shellfish.

Food intolerances occur when the gastrointestinal (GI) tract doesn’t respond well to a specific food or an ingredient used to prepare the food. These responses are not always immediate nor are they always reproducible. Symptoms may include gas, bloating, heartburn, vomiting, constipation, diarrhea, congestion and headache. Intolerances may occur if a specific enzyme is missing to help digest a food, such as with lactose intolerance. Other common food intolerances include wheat/gluten, food additives (found in processed foods), corn, soy, and monosodium glutamate or MSG.

Food allergies affect between 5 to 8% of all kids. If there is no family history of allergies, the odds are good the kids will escape them. Intolerances are more prevalent than food allergies and may be difficult to determine since they are unique to the individual. Based on this information, could it be that a child believes an allergy exists, when it may actually be food intolerance? This can be tricky!

Based on all these theories, some ideas that may help:

Oh, and in “War of the Worlds,” the aliens died from a common human germ since they had never been exposed to it to develop immunity. They probably died from the common cold. To an alien who grew up in an entirely different and perhaps germ-free environment, there is nothing common about an Earthly cold.

Lilacs are in bloom, and they are magnificent. I have two small lilac bushes that I can snitch a few branches from and bring indoors for my enjoyment.

They make me happy. Natural aromatherapy.

It’s almost strawberry season, and I don’t want you to miss out. This is your friendly reminder that June is usually when markets have local berries. Locally grown strawberries are typically smaller than California or Florida berries, and they are sweeter.

They make me happy too. I have a few strawberry plants in my garden, however critters usually get the berries before I do.

To celebrate strawberries, I’m sharing a recipe with you that is AMAZING! It’s really easy. The crumble topping is very similar to my recipe for the Quick and Easy Chocolate Chip Cookie Bites—minus the chocolate chips, of course.

I hope you seek and find a few simple pleasures today that make you happy. Let me know how you like the Strawberry Crumble. I had a few stalks of rhubarb and added them in with the berries. WOW! Even Mr. Non-Compliant likes it, so you know it’s a winner!

FOR THE CRUMBLE TOPPING

You could substitute other fruits for the strawberries, depending on what’s in season.

Sending You Love and Gratitude

Today, I’m sending you love and gratitude. (No mask required.) Maybe you’ve got plenty, and now you have extra. Please share.

In the book, “The Miracle of Water,” the author Masaru Emoto, demonstrates how water’s unique role in transporting the natural vibration of these words can help you welcome change and live a more positive and happy life.

Dr. Emoto has photographed thousands of water crystals in his years of research, and few have been as beautiful and life affirming as those formed from the words “love and gratitude.” 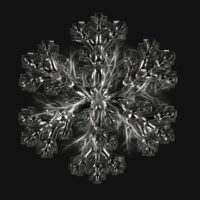 He also has photos of water crystals impacted by negative words. The difference is amazing.

Considering that the human body is primarily water, about 70%, it’s a really good idea to surround yourself with positive, happy words. What have you said to yourself and others lately?

A bit of advice from Dr. Emoto:

This Memorial Day weekend will be unique. If you’re feeling a bit sad about “what might have been,” give love and gratitude a whirl.

And maybe make a nice fruit salad. I picked up some pretty tasty nectarines this week that scream summer. There’s something about the juice running down my chin that brings back fun memories.

“When you continually think thoughts of love and gratitude, you simply cannot help but be changed. These thoughts will change the water within you, and the result will most certainly be a changed you.”—Masaru Emoto

Is Dairy Your Friend?

It’s possible to have a sensitivity to dairy, be allergic, or lactose intolerant. Or, have no ill effects from consuming it at all.

Much of this is linked to your genetic makeup, and it can get pretty complicated. There are those who are a mess when they drink a glass of milk, yet can eat some aged cheese or Greek yogurt and feel terrific. 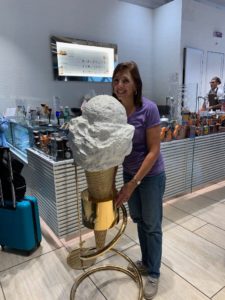 The point is, if you’re experiencing symptoms, it may be time to play detective and simply notice what happens in your body when you consume certain foods. Sometimes dairy is the bad guy.

Some things to consider about dairy:

If you or someone you love is having issues with dairy, I can help.

My book, “Cookies No Milk, Pizza No Cheese: An Ice Cream Lover’s Guide to Raising Children with Dairy Allergies,” offers real solutions and alternatives to make living without dairy EASY!

Yes, in case you haven’t guessed, the title says it all. 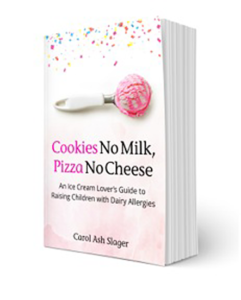 Dairy alternatives were a bit more difficult to find in the 90s than they are today. At any rate, working with folks who have food sensitivities/allergies is a specialty of mine. I have my sons to thank for this training.

Sometimes, this is a challenge.

If you’d like to check out “Cookies No Milk, Pizza No Cheese: An Ice Cream Lover’s Guide to Raising Children with Dairy Allergies,” on Amazon, CLICK HERE. Besides containing a wealth of information on dairy allergies, there are funny stories, family favorite recipes, and even a few of my poems.

“People vary in their ability to digest and tolerate dairy, whether because of genetics, age, or digestive health and intestinal microbiota.”—Ryan Andrews